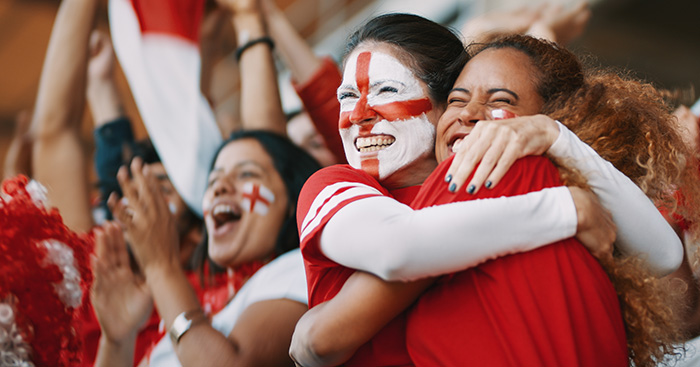 Fresh from celebrating the win last night, our CEO Melissa Davis says we must now follow on from the European Championship win to make sure female footballers get their same opportunities as their male counterparts at all levels and ages.

Football finally came home. On a brilliant July evening, at Wembley against the Germans, our footballers landed their first major trophy in a thrilling 2-1 win.

Bravo our brilliant Lionesses. What a match. What a month it’s been following their march to the final and then, in a game which was on a knife edge for almost all of the 120 minutes, their final steps on their journey to becoming European Champions.

It sounds good, doesn’t it? European Champions. And so it should.

Their success wasn’t just in winning the trophy but, finally, in putting to bed any remaining doubts that women’s football could ever capture the hearts and minds of the country in the same way our men’s team does.

There will be a few strained voices and sore heads in the England camp this morning – but they deserve it. The sight of them on the pitch at the end, celebrating as a group and interrupting each other’s interviews, is something that will stay with me for a while. It was just brilliant to watch.

And so too were the pictures of the young fans celebrating. Particularly, and I make no apologies for this, young girls enjoying their football.

Lift-off for the women’s game

The Queen led the way, describing our victorious footballers as an ‘inspiration’ to young female footballers everywhere. I couldn’t agree more.

Scores of well-known figures have added their voice but perhaps none so powerfully as former England and Arsenal star Ian Wright, who demanded that this finally be the moment that women get the same opportunities as men and boys, from school onwards.

“If girls are not allowed to play football just like the boys can in their P.E. after this tournament, then what are we doing?,” he said before the final began, also calling on the Premier League to take over the WSL so it got the same investment and profile.

It’s hard to argue with him. If the Queen’s wish that this be an inspiration to girls across the country is to come true, then they have to be allowed to play. And that means they need pitches, coaches and clubs willing to let them play.

If that doesn’t happen now, then the scenes last night will have been a false dawn and a lost opportunity. Thousands of women and girls will have watched last night and wanted to give football a try. Some of them will be the next generation of stars. Let them play.

Making the most of success

Seventeen million people tuned into the BBC last night to watch the game. Thousands are expected to cheer the team in Trafalgar Square today. Indeed, as I write this on a sunny Monday morning, they’re already queueing and the gates aren’t even open yet.

It’s a huge audience for a sport which, not too long ago, was often treated with disdain and viewed as a side-show, a lesser version of the men’s game.

But that was then, this is now. And right now, this is women’s football’s moment. We have to seize the opportunity.

Yes, the women’s game isn’t yet on a par with the men’s. But surely this will be the catalyst for the Lionesses’ stars and those who play with them in the WSL to start receiving the same attention, the same sponsorship opportunities and, crucially, the same packed stadia which greet most men’s teams at the highest level.

That way, we may also see some of the same investment in the stars of today and tomorrow. And tomorrow matters as much as today.

Because if the end product of last night’s outpouring of joy and celebration isn’t a flood of young women and girls being able to follow their own footballing dreams every weekend, as their male counterparts have always been able to do, then we will have failed them and failed our European Champions.

European Champions. I don’t think they’ll ever tire of hearing that. Or nor should they. Congratulations to every single one of them. You’ve made us all proud.