Press and the pandemic 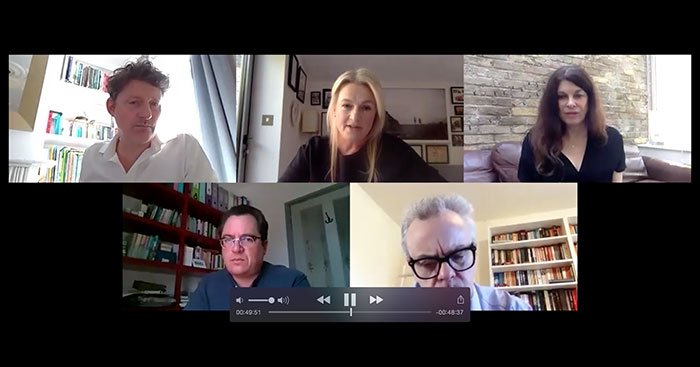 In January four journalist friends joined me for a panel discussion with a live audience. Yesterday, just as in January, 100 contacts from the legal world got, for a change, to ask the press questions.

The world, though, is very different to the last time we did this. In January, when a member of the audience coughed or sneezed, coronavirus was mentioned in passing, but without any serious intent. There were no Covid-19 questions.

This Q&A was via Zoom, a platform most hadn’t heard of in January, with the journos sat in whatever domestic places they could find in their homes. As in January we had the Lawyer’s deputy editor, Matt Byrne, associate editor of the Independent Sean O’Grady, technology writer and journalist Joanna Goodman, and the Law Society Gazette’s commissioning and features editor Eduardo Reyes.

Could this, as tech platforms insist, be just the same as being in the room? Well, no, but given the extraordinary context of pandemic lockdown, this was a great group to hear from.

Was this a new experience for them? Mostly not for Joanna Goodman, whose freelance life is carried out from her home in west London, but she reflects that she is doing many more interviews via video call, and finding that more interviewees are asking for video calls.

The Indie’s Sean says he is quite old school in his commitment to the office – younger staff providing a sense of energy that he misses. Still, he says, journalists and lawyers are fortunate in being able to work from home.

Eduardo says this is very different to his experience of being freelance after the financial crash cost him his job as editor of In-House Lawyer Magazine – when each freelance gig landed him an extra desk for his use in some central London office. The Gazette’s daily online and weekly print deadlines are now worked around childcare, all done from home.

Matt was working one day a week from home before the crisis, but whereas that could be designated as a ‘writing day’, doing all from home is very different, he says.

Eduardo, Matt and Sean note there was a spike in online readers as lockdown took hold – substantial in each case.  But has interest in coronavirus stories been maintained?

Sean says the initial spike was huge, but that reader interest is now shifting to other stories – there is a limit to how many times readers will look up symptoms and advice, and the advice is not really changing – stories on ‘Harry and Meghan’ received interest that they would not  a fortnight ago.

Joanna’s reputation as a tech journalist was, she said, getting her plenty of commissions, and special interest had been paid to a blog post where she took aim at poor advice newly-minted ‘experts’ were giving on remote and flexible working.

Within the legal sector, Matt and Eduardo noted, a spike in readership for coronavirus related stories had been maintained – though the stories had changed.

Eduardo noted that huge interest in just one firm, Baker McKenzie, closing its London office had been replaced with stories on scores of similar firms closing their doors. The Gazette’s ‘Lawyers in Lockdown’ series had adapted too – with accounts shifting from lawyers recounting tales of tripping over their cats on the way to a desk, to one whose colleague had contracted the virus, gone to intensive care, and was now home recovering.

Matt related the success of the Lawyer’s daily wellbeing content, and the dramatic increase in open rates for its email newsletters. What about other content? He expected Lawyer content like its ‘Hot 100′ to be as strong as ever. People, he, Sean and Joanna reflected, were as keen on such information as ever.

Lawyers, the panel and audience were using social media a lot more. Joanna said social media interactions with lawyers were easier than ever – the lockdown had made people more accessible, though it had also meant that contacts’ expectation of journalists’ accessibility by these routes had increased. This wasn’t always welcomed.

The discussion turned to openness and vulnerability in the new context. Eduardo noted that it had become much easier to engage contacts, and find new ones, and that they were using a wide range of social media platforms. Contacts were being candid and authentic in a way that led to better content. Joanna and Matt related a similar experience.

What were they looking for critically? Was it okay to furlough staff when partners routinely take home six or seven figure profits a year? Sean notes that major accountants have decided it was not moral to take state money for such a purpose, and Matt notes a US law firm and City firm that agreed. Eduardo asked where the line should be drawn, though – partners were business owners and would take a major hit, and law’s £40bn economy was deeply enmeshed in all our welfare.

Matt and Sean both pointed out that hypocrisy was the most damaging point that could emerge for firms.

Do things just go back to normal after lockdown? Mostly not, the panel think. Sean is looking forward to being back in an office, and Eduardo and Matt note that there are things that get missed in remote working. Joanna points out that the tech does not change what is, and what is not, a story.

Matt says the change seems permanent though – we have all, he notes, seen senior partners in their kitchens, and the honesty all have had about their position has mostly worked. Eduardo says most who have been more frank about their lives and contexts have had a good experience of this.

The panel think that in-PR professionals are being less ‘controlling’ around what lawyers say to the media, and that this has mostly been a good thing. Lawyers have handled this appropriately.

Does this mean that law firm communications and coverage of law has changed? It felt like it has, from this discussion. I for one am pleased with that. I always like it when clients build their own relationships.

I hope you’ll join us with the panel to find out in six weeks time.

Now. Just one member of this online panel was wearing shoes. Could you tell which one?