Social media: a force for good or evil? 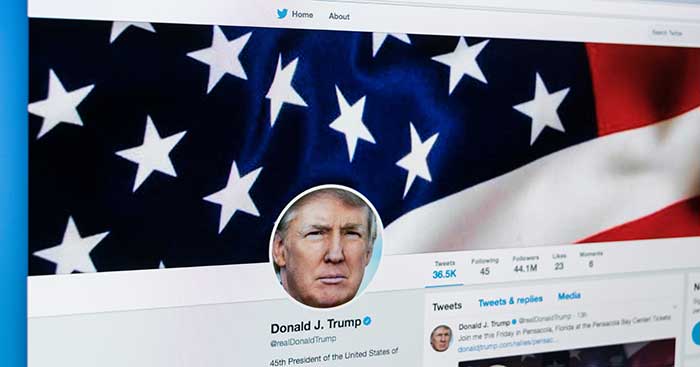 Not before time, some say, social media platforms such as Twitter, Facebook and Instagram have taken drastic action against Donald Trump and banned his ability to voice his opinions whilst serving his last week in office.

It all looks like the end of the road for a thoroughly dysfunctional relationship between the outgoing US president and the major social media platforms. He exploited them, even as he railed against them.

And these platforms used the president to drive traffic, even as they stood up to him. Lest we think the ‘mainstream media’ has been looking on dispassionately at all this, they are in on this game. Newspaper and network execs are contemplating the drop in circulation and traffic the president’s departure will mean for them at a very challenging time for traditional media.

It seems to be a time for big questions. Are social media platforms, like Twitter, a force for good or evil?

Acting so late on the president’s controversial account, the social media platforms don’t look great. But if the news this week had instead been of a military dictator overthrown in a popular uprising, aided by tweets and Facebook messenger, we’d be feeling very different.

Conspiracy theories and conflict are durable, and were so long before the internet. So what’s new?

Noticeably, its speed is new. Nancy Pelosi could see what was unfolding in her office, occupied by far-right demonstrators, pretty much as it happened. And demonstrators and insurgents could follow one another’s progress, and respond to events, instantly.

You might think of social media as a conflict zone, which in places it is. But a lot of it is also an echo chamber – people interact with people they agree with much more than those they do not. That consolidates their world view much more than even the purchase of a newspaper that broadly aligns with their views would do.

The direct communications route to supporters that social media gives public figures, is the factor that looks to be more than bigger or faster than the ‘old ways’.

But social media was – is – also of use to, for example, the security services. The Capitol invasion was even predictable from it, as is, awkwardly for those charged with keeping legislators safe, now being pointed out.

And the traditional media use it to find stories, and also to promote their own coverage of events. Journalists can have huge followings on all platforms.

Twitter and Facebook in particular have kicked against the notion that they should be regulated and accountable for user content, even as they take steps that show they partly get the point about the need to manage unacceptable content.

You wonder, though, how with political content they could do much that helps. When Twitter put ‘health warnings’ on some of Trump’s tweets, it seemed to serve only to wind up the Commander in Chief and his supporters – and looked to his opponents like it was too little too late.

So what now? My suspicion is that these debates on social media will calm down somewhat after Joe Biden is sworn in as president. Twitter got so ‘hot’ because that’s where Trump, a big figure, put himself as at a moment of power. If Biden is fighting his battles elsewhere, then that’s where our attention will go.

Look, for example, at what this pandemic has done to our own government communications – suddenly we’re all back to following press conferences given by ministers, a format PRs and journalists declared dead long ago. But it’s where the story is unfolding, so back we all go – even if we’re all on Twitter at the same time.

Social media platforms, and traditional media, will miss the traffic they got from Trump. But I think at some level, they also need a break. Who knows, maybe Trump will in the end find he enjoys his own break?

CEO Melissa Davis discusses the themes covered in our most recent webinar, which looked at how to protect yourself online while making the... read more