‘Targeting your story is like dressing for the occasion’ 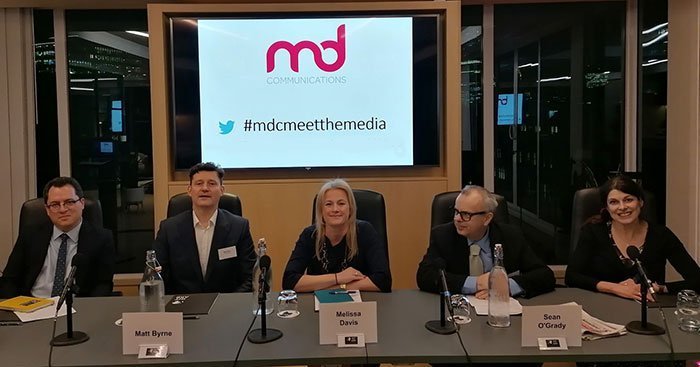 A great aspect of an evening with friends is swapping stories – hearing things you wouldn’t if you hadn’t met up. And so it was last Thursday, when four journalists – The Independent’s Sean O’Grady, The Lawyer’s Matt Byrne, technology and business columnist Joanna Goodman and The Law Society Gazette’s Ed Reyes – brought their century-plus of journalistic experience to MD Communications’ 2020 ‘Meet the media’ event.

All four have benefited from old-school training and habits – writing a 2,000-word feature to order or interviewing a hostile subject are skills hard-learned – but we start by talking about social media, the very modern context in which they all now need to operate.

The role of social media

Ed recalled a period when, for him, Twitter had lived up to its toxic reputation – writing on human rights, Brexit and Northern Ireland earning him a troll and abuse from Twitter accounts that had ‘the bloodied hand of Ulster’ as a profile pic. He said his current experience was much better – in part he had shared more, not less, of his life. He also observed that Twitter had become more about following individuals as if they were ‘channels’ – it was harder to get many new followers from scratch. Twitter seemed calmed but less democratic now, he added.

For Sean, newly re-engaged in Twitter after a gap, the immediacy of social media is important, and matches something that has always been important in the media – being first and being seen to be first. ‘When something breaks, publications want to be first,’ he pointed out. Being a trusted source means helping journalists to be first with information and insights. ‘Give the journalist your hot take. People want to know what happens next,’ Sean added.

‘How do you approach the press – does it matter if you are quite junior?’ one audience member asked. ‘I don’t care who rings me up,’ Matt answered, ‘or what their job title is, if they have something interesting to say.’

There was some sympathy from the panel on the pitching process. ‘News desks are incredibly rude,’ Sean observed. ‘When pitching, start with your headline and work backwards.’ Comment and features, Ed noted, were less brusque: ‘The senior common room of any publication.’

It helps, Joanna suggested, to think that ‘targeting your story is like dressing for the occasion’.

Dealing with a crisis

Of course, in dealing with the media, not everything is a pitch. What if it is a crisis or a negative story? ‘In a crisis, have a line ready,’ Joanna advised. ‘Don’t start with off-the-record.’

Be sure of your facts, Ed said: ‘In a crisis, know exactly what happened before you go in guns blazing demanding rebuttals or corrections are printed.’ And of course, Sean added, the call might be a fishing expedition, based on very little. ‘Try not to feed the beast,’ he said. ‘They can’t write 600 words off a scrap of gossip.’

Some caution is appropriate then, but in general being helpful goes a long way. ‘Engage,’ Matt advised. ‘Journalists need experts and a background briefing from a top lawyer is incredibly valuable. That’s someone you’ll go back to.’

The need to be ‘authentic’ was used at the start of the discussion, in relation to social media, but got repeated throughout. It was fitting, then, that the panel had self knowledge and authenticity in spades – an evening of advice and war stories with a point.

If you’d like to talk about dealing with the media with confidence, I hope you’ll get in touch.