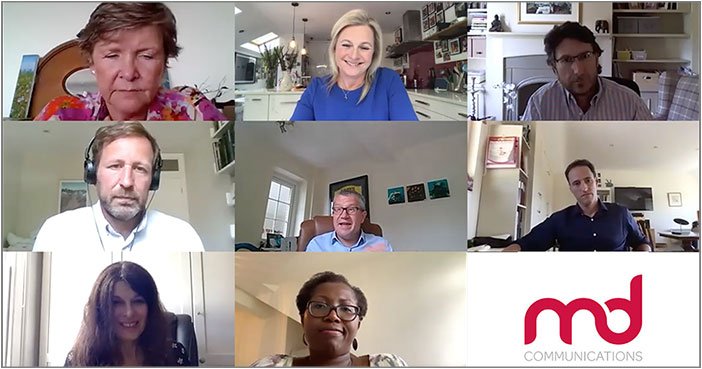 Looking at a range of topics around the headline of whether technology is a force for good or will it bring about the end of the legal profession, the panel discussed what legal tech meant to them, what we mean by AI and how it is used, adapting to working in the new normal, diversity, training, and work-life balance, with three polls to gauge the audience’s thoughts on the issue.

Tech: a force for good?

The first poll asked whether the expansion of tech in the legal industry was a force for good, with 80% saying it was, and 20% thought it was complicated. No one thought it wasn’t.

This goes beyond new tech, however, to a wider issue: Ed Vaizey considered that understanding basic technology tools, such as Microsoft Office, has now become 20-40% of people’s jobs. Rick Seabrook thought that tech had given us the ‘”basic plumbing” to run a law firm, around e-discovery and document management, but the question remains where law firms go from here and whether the “opportunity will be grasped by the sector”.

In terms of access to justice, Kathy Valentine, who works in the largest law firm in the world by lawyer number, Dentons, noted that an AI tool had been developed to help those who were being held at immigration in the US – Airport Lawyers – which automated a Q&A so that their needs could be assessed more quickly. She hoped that more organisations with altruistic or pro bono inclinations would facilitate developing this type of technology.

The discussion moved to new tech – Sharon Blackman, a buyer of legal services and GC at Citi Group, said that when considering whether to invest in new tools, firms need to ask how it will fit with what they already have and do they actually need it. She recommended an audit of all tech used already to understand any gaps and areas of duplication but said that implementation was often slow and lawyers were resistant to change. Mark Blunden, the tech lawyer on the panel,  said that firms need tech savvy people to decide what new tech was needed, as the powerful technology they already have is only used to a fraction of its capabilities, and often you already have the solution.

Falling behind – a diversity issue?

The second poll asked whether the legal sector’s adoption of tech was in line with the other industries, with a staggering 88% saying it was behind, 8% said in line with, and 3% said ahead.

Rick said this was due to heritage issues, with a tiny percentage of firms having a digital plan.

Ed Vaizey, who spent time as a barrister before moving into politics, believes that lack of diversity is one of the reasons that the legal sector is lagging behind, as it is ‘generally led by white, middle class, Oxbridge-educated, middle-aged men’, so is “not at the forefront of innovation”. There is a threat to the legal profession as it is not ripe for disruption.

The issues with diversity in the legal sector is “often caused by the law firms themselves” said Joanna Goodman, a leading tech journalist in the space, citing law firm recruitment that specified first-class Oxbridge degrees – meaning that firms are excluding a huge proportion of the potential workforce.

When looking at AI, there is a lot of pressure for firms to buy in to this technology, in order to demonstrate that they have it. Some of the panel thought AI is used as a buzzword to help sell new tools, and unless there was a good reason why it added value, firms should not be lured in by it, but it should be driving more firms to investigate new tech.

It is used as a “door opener to business development” said Chris Fowler, our other buyer of legal services on the panel, as GC on tech at BT, also noting that there are stark differences between the legal industry and the tech industry, where the mantra is to “fail fast” and produce a minimum viable product, getting products out there quickly. The biggest challenge for the legal sector is to move away from legacy systems and embrace being less than perfect.

Joanna Goodman pointed out that many AI tools merely put things back into Excel, and it’s important to ensure any new tech is usable and adds value. She added that AI is really about algorithms, which “are just maths” and are biased, so there has to be a human element. The panel were all in agreement that justice would not be decided by an algorithm in future.

A final poll asked whether the audience felt supported about the expectations placed on them to use technology more when working from home, with 70% saying they felt supported, 13% said no, and 17% said it’s complicated. This is encouraging as with mental health and vulnerability currently such a big topic, a huge part of this is linked to technology and the demands placed on the workforce in this new normal.

The panel were divided on whether, with the blurring of work and home life, technology has helped or hindered in maintaining healthy minds. Kathy said that in terms of diversity and inclusion, she had “felt more included, in more venues, than ever before,” allowing her to have better connections with people, because video tech allows her to see them and them to see her. Kathy Valentine noted however, that “when you work at home, you’re always at work” and that more work on boundaries is required.

Mark Blunden identified an age profile around this – he’s seen that younger people struggle more without physical interaction, as the older generation is most likely working in a large house and garden, while the junior section of the workforce may be in small flatshares, or looking after young children, without outside space. Sharon Blackman agreed, but noted that this new tech allowed the delivery of training globally, rather than just to one team or region, which was a benefit. Ed Vaizey’s takeaway was that it was about balance – human interaction has to come back, but the experience will change the way people work – he hopes there will be more flexibility around maternity and paternity leave, and where people work, which will open up opportunities for the potential workforce. However, “physical human interaction is necessary both for career progression and for mental health,” he says.

In conclusion, a lively discussion with many insights around what firms need to do around legal tech and how the sector can develop. As Ed Vaizey says, “the legal profession is one of our most successful exports – it would potentially be a massive win for UK PLC if our legal profession becomes a leader in legal technology.”

Watch a recording of the webinar